Jannah Theme License is not validated, Go to the theme options page to validate the license, You need a single license for each domain name.

There is this interview of Yemi Elubuibon – he is a Yoruba poet, playwright and a visiting professor of Ifa Mythology at the Chicago State University.

During the interview he said

The Ifa Oracle is a great oracle in Africa like Jesus came from Jerusalem and Mohammed came from Saudi Arabia, so also Orunmila came and gave knowledge and wisdom.

In a separate interview, Dr. Peter Fatomilola who is a Theater Arts lecturer and a writer also spoke about the fundamentals of Yoruba religion. He said

What these two Yoruba scholars seem to be saying is that Orunmila who is the founder of Yoruba religion is also a messenger of God, just like Jesus in Christianity and Mohammed in Islam. The teachings of Orunmila which are contained in Ifa can be likened to The Bible and Qur’an which are believed to be direct instructions from God Almighty.

Who is the one true God?

The underlying principle of all religions is that God is one; all the manifestations of God have come with the same purpose, to lead mankind into the paths of virtue.

See also  How To Change Location On Snapchat

Read Also: Why Bola Tinubu Should Not Be Nigeria’s President in 2023

In Islam, Muslims believe that there is only one God worthy of worship without equal; the one who created the heavens, the earth and everything in between. The one who sent prophets and messengers since the creation of Adam to guide mankind to Him and to tell them of just one fact; that there is no God but He.

The God worshipped by Jews, Christians and Muslims is, of course, the same God. There is only one God. It is just their understanding of God that is different.

In Africa, God is worshipped as the Supreme Being and He has no equal. There are other created spirits that help to discharge the duty of governing the world. These spirits are assigned various functions.

These spirits are often worshipped and appeased with belief that they are intercessors between mankind and the Almighty God.

Can traditional African beliefs be merged with Islam and Christianity?

Nigerian Nollywood movies would say yes. Most Nollywood movies often contain a scene whereby a practicing Muslim or Christian often living in the big city would visit their village to perform some ritual rites and appease the spirits. 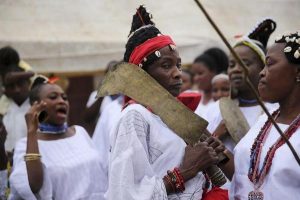 This is the reality of most Africans, they believe that appeasing the spirits like it has been passed down to them from the generations before them, does not diminish their faith in God. After all, these spirits were created by God Almighty to help discharge the duty of governing the world.

Islam, Christianity and Judaism believe that those who are assigned the various functions of governing the world are the Angels. The Yoruba people believe it is the spirits in the form of idols they worship that watches over the world.

This article is barely an introduction to the concept of God among the Yoruba people in West Africa.

Statistician with interests in finance, risk management, loan products and market surveys. I also write on crypto currencies, Forex and a variety of financial instruments.